Süleyman, Duke of Tigris, is the third highest ranking noble of The New Human Empire and a very respected war hero who has kept the Empire together for the past ten years. He has served the Empress for 300 years. He is also the Deputy of the Imperial Secret Council who has known Astharoshe Asran (Suleyman's distant relative) ever since she was a little child. He is the uncle of Shahrazad Al-Rahman. He was used by the Rosenkreuz Orden in a plot to overthrow The Empress.

In the novel, it is stated that Süleyman is a Methuselah and a high noble in the Empire. His posts include Second Privy Counselor and Vice Prime Minister and Astharoshe used to call him "Uncle."

Suleyman is a handsome dark skinned man with curled black hair that is tied up in a ponytail, blue-gray eyes and he wears a blue uniform.

Süleyman is first seen at the Dewan (court) in the Celestial Imperial Palace, where he greets Astharoshe Asran and Abel Nightroad as Süleyman apologizes for missing out the funeral of Astharoshe's mother, much to her embarrassment. The Duke informs them about the rumor of two Terrans, a man and a woman who had broken into the Empire. He also warns Astharoshe that they might interrogate her as well, as she is an expert on 'outside' matters. Süleyman leaves, but not before asking if Astharoshe would have some time for him as well to discuss politics of the 'outside' world

While the noble Methuselah discuss murder of the Duchess of Moldova. Baybars accuses Ion Fortuna, but Süleyman steps up and defends the young Earl. The Duke of Tigris intervenes and informs Baybars that it is a heavy accusation to blame Ion for the murder of his own grandmother, and reminds Baybars that wrong accusations can lead to bad results. He words earns him the admiration from Astharoshe, but it goes to waste when Radu Barvon shows up and accuses Ion as well.

Süleyman is next seen when he tries to stop Seth Nightlord and Esther Blanchett from alarming the Duchess of Kiev about the plan to murder Empress Augusta Vradica. Esther manages to escape, but Süleyman uses the Ring of Solomon and shoots at Seth. Shocked that a girl could take down autojagers, he asks from the strange girl if she is a Methuselah. Seth says that she unfortunately does not belong to such a fine race, and so Süleyman uses his ring and sends her off a cliff, to her death.

Astharoshe and Abel visit Süleyman to find out if he knows of the location of Radu. Astharoshe tells to the Duke of Tigris about what she has learned about the planned bombs, not knowing he was the culprit. The Duchess asks Süleyman where the Baron of Luxor is and Süleyman answers that Radu is escorting the Empress on the Island of Beloved Children. Süleyman quickly moves his attention to Abel, asking from him if he saw Ion with anyone else - like the redheaded girl - revealing that he knows them to be the "traitors". Using the Ring of Solomon, he attacks both Abel and Astharoshe. The Duchess demands an explanation from the Duke she respected to much, wanting to know what drove him to do such things, but Süleyman replies that she's too young to understand. He explains that the greatness of the Empress has driven him into this, and that he's discovered that she's is something "that doesn't belong this world", much to Abel's sadness. Abel and Astharoshe escape by jumping through a window while Süleyman contemplates his hate and love for the Empress.

Süleyman is next seen with Radu in his mansion. Radu assets the Duke's plan to annihilate the Empress was because she has become weak and diplomatic to the Terrans of the outside world, even suggesting they were equals. Süleyman does not directly respond to Radu's assumptions about him, but instead, affirms that it is too late for him to turn back now.

The whole Celestial Imperial Palace is in chaos the next day, under the presumption that the Empress has died in the bombing of Mirka Fortuna's tomb the night before. Süleyman nominates himself as a ruler-candidate, but Astharoshe appears and accuses Süleyman of treason. Astharoshe tries to summon the captured Esther and Ion as witnesses, but the Duke tells The Duchess that it is too late as that Ion and Esther had killed each other. Astharoshe is shocked, but soon Ion and Esther stumble into the Starpalace, to the shock of Süleyman. Süleyman tells the security to capture the escaped prisoners, but Empress Augusta Vladica appears and stops this, revealing that she is alive and well. Everyone is shocked as the The Empress explains that she was not present on the bombing and introduces her double, the Duchess of Moldova. The Empress reveals her true face as Seth - the very girl Süleyman thought he killed. Seth tells Süleyman that she is disappointed and had high hopes for him. Süleyman becomes angry and argues she never had trust for any of the Methuselah. The duke shoots her with his ring - but misses on purpose in the last second and is fatally killed by Astharoshe's Gae Borg.

In the manga, Süleyman briefly remembers a time he saw Seth's real face when he was in his youth, travelling the desert. Back in the present, Seth asks him why he missed on purpose, to which he replies, "is there a place in the world for child who does not love his mother?" In his dying moments, Süleyman tells to Seth that he hates her, having served her for three hundred years. The Empress had become an existence he couldn't understand. The Duke asks Seth where she came from and where they all are headed, who she is, but then corrects his himself and asks who they themselves are. Seth tells Süleyman that if she could answer that, she would be much happier. She closes Suleyman's eyes for him after he dies.

Süleyman is mentioned by his niece, Shahrazad al-Rahman, as the person who raised her after her parents died. He was in charge of protection of regional towns and cities and took her on his travels, but in those bordering cities of Misr, Cyprus and Palmyra was mainly inhabited by Terrans. Süleyman taught her that regardless whether people were Terran or Methsuselah, they were all human, and the two befriended many Terrans on their travels. Shahrazad fled the Empire after she unwittingly became implicated in her uncle's betrayal of Empress Augusta Vladica.

Süleyman is a variant of the Arabic name, سليمان Sulaymān/Silimān, the name means "man of peace" and corresponds to the English name Solomon.

King Solomon is mentioned in the Hebrew Bible as a man of great wisdom, wealth, and power, but ultimately as a king whose sin, including idolatry and turning away from Yahweh, leads to the kingdom's being torn in two during the reign of his son.

His name is spent as "Sulayman" in the English translations of the novels and manga, but it was written as "Suleyman" in English in Trinity Blood: Canon.

Suleyman and Astharoshe Asran
Add a photo to this gallery 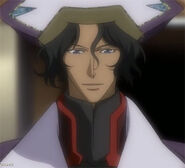 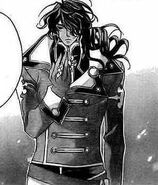 Retrieved from "https://trinityblood.fandom.com/wiki/Suleyman?oldid=13428"
Community content is available under CC-BY-SA unless otherwise noted.