Paula Souwauski, also known as Sister Paula and codenamed Lady of Death, is a member of the Vatican Department of Inquisition and the second-in-command of Petros Orsini, the chief of the Inquisition who has a PhD in Business Law and Administration.[1]

Sister Paula has short light-grey hair that covers the right side of her face, dark eyes and she occasionally wears a red nun's habit.

Her manga portrait features her with a small Helleborus X hybridus (White Lady Spotted) flower in her hand. Also known as the "Christmas Rose", this flower was said to sprung from a shepard who cried because he did not have a present for the child Jesus. This flower was then given to the child Jesus.

In Thores' tarot cards, Paula's arcana is "The Swords".

In contrast to Brother Petros Orsini's personality, Paula is a calm, quiet and serious young woman.

Pope Alessandro XVIII arrives in Albion some time after Esther Blanchett and the nun welcomes the Pope, who is quickly uttered away by Brother Petros Orsini. At that moment, Mary Spencer arrives to inform Esther she has new information regarding the disappearance of Abel Nightroad in the slums. Brother Petros is upset that the priest did not come to greet the Pope, while Alessandro expresses concern over his disappearance. Esther informs the Pope she hadn't seen Abel all morning, and Alessandro requests Petros to go look for him, assuming the two were friends. Shocked, the Knight turns to Esther and tells her to ask her own department for help, but she calmly replies the other people are occupied. The Knight accidentally lets it slip that he's on an important mission assigned by Cardinal Francesco di Medici, Sister Paula interrupts him and simply tells Esther the Vatican was planning to build a new church in Londinium. Petros 'apologizes' to Esther for being unable to help, but the Pope apologizes in return for asking so much from such a busy person like himself.

Stung by the Pope's sad expression, Petros begins to panic. Paula interrupts once again and informs him to follow the Pope's Holy Decree while she takes care of the mission. A passionate Brother Andreas also appears and offers to do everything in his power to serve him in his absence. Moved by his words, a reenergized and swears to bring the "useless oaf" back, and shall he not return, he'll serve his head on a platter. Alessandro just stares in silent shock.

Sometime later, when Esther and the Pope are at the races, Mary is seen talking to Paula. Paula convinces Mary to annihilate the Albion underground Ghetto methuselah, and in exchange, the Vatican will offer to forge documents regarding a secret marriage between the late Crown Prince and Mary's mother, therefore making Mary a legitimate heir to the throne. Mary accepts this offer, but an explosion from under the ocean suddenly occurs.

Sister Paula is seen later informing Brother Petros that the Pope has been kidnapped.

Paula is an extremely skilled mercenary who is known for taking many lives in her line of work and her killing tactics were so effective that even Radu Barvon could not detect her presence until she was ready to attack. Despite his resistance, she easily outmaneuvered him and supposedly killed him, but he still lives. Paula has an unwavering loyalty to the church, and believes that people are either with it or against its illustration, it was accompanied with the words: "Kill all heretics, regardless they be man, woman or child". Despite her ruthless and serious nature, she seems to have a strong loyalty to her superiors, including Brother Petros Orsini. 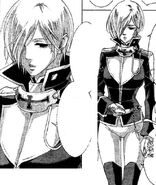 Retrieved from "https://trinityblood.fandom.com/wiki/Paula_Souwauski?oldid=13335"
Community content is available under CC-BY-SA unless otherwise noted.