Monica Argento, codenamed Black Widow, is a human female witch—the result of pre-Armageddon experimentation—and an agent of the Papal State Affairs Special Operations Section ("AX"). An assassin formerly associated with the Cosa Nostra organization, Argento is sadistic and takes joy in killing her enemies without mercy, regardless of whether they can fight back or not.

Argento was conscripted into the service of the Vatican Papal State after failing to kill Cardinal Caterina Sforza, the head of the Vatican Ministry of Holy Affairs. In order to ensure her loyalty, the AX forced her to wear an explosive device in the form of a cross necklace; any attempt to forcefully remove the necklace will result in an explosion, killing Argento in the process.

Sister Monica has short dark hair, dark lipstick and prefers to dress like a priest instead of a nun. In the manga, her top is completely exposed to her waist with her chest almost completely showing and she wears short black shorts instead of pants.

Monica has a unique necklace, which will explode and kill her if she tried to be remove it with force. From that necklace hangs a cross, that reaches down to her breasts. She also has a naval jewel in a shape of a cross.

Her manga portrait features her with a black rose, symbolizing death and hatred. Her arcana in Thores' tarot cards is The Moon.

Monica was the daughter of a mafia boss. Little is known about Monica before she "joined" the AX. Prior to her service to the Vatican, she stood in front of a grave, touched her stomach and asked if her unborn child went to wherever the person in the grave went. Monica then cut her hair and swore to avenge them.

She was later sent to prison, shortly after her failed assassination attempt on Cardinal Caterina Sforza. Her incarceration did not last long, however. Impressed by her would-be assassin's skills, Sforza conscripted Argento into the AX, a covert department in the Ministry of Holy Affairs. As a precaution against betrayal or any future attempts on the cardinal's life, Sforza had an explosive device—built as a necklace—placed around Argento's neck. The necklace was designed to explode if it was removed by force; the cross on the necklace symbolized Argento's new allegiance to the Catholic Church. Argento was given the codename "Black Widow" in addition to her status as an AX agent.

Sister Monica first appears when she is summoned by Caterina Sforza to help Tres Iqus search for Esther after she was kidnapped by a vampire. Tres is against the idea, but Caterina is not dissuaded. Tres turns around and catches Monica with her daggers at his neck. Monica jokes that Tres is being a "thickhead" and bows before Caterina.

Caterina shows her the picture of Esther, the girl she is going after. Monica asks what she should do if Esther were to resist her capture, and if she should do as she sees best. The Cardinal replies Esther has to be stopped by all means necessary, even if it would mean bringing her back dead. Monica does not argue and leaves with Tres to gather information.

Tres and Monica head to a pharmacy, where they ask from the clerk if he has sold any blood tablets recently. The clerk says that he doesn't know what they are talking about, and presses a hidden button with his knee, alerting some strong men to his aid. The men tell her and Tres to leave before they get serious. but Monica rebuffs that they are the ones going to die. The men get angry attempts to punch her, but are shot by Tres. The clerk tells them everything and from where the vampire came from. As the two are about to leave, one of the men throws a dagger at Monica, but it simply passes through her heart. Sister Monica turns around and walks over to the man and, ignoring Tres' commands to stop, gruesomely kills him.

The two make their way to the hotel and apprehend Abel Nightroad, Petros Orsini, Esther Blanchett and Shahrazad Al-Rahman. Esther and Shahrazad escape, while the other two stay back to fight. Abel fights against Tres, while Monica introduces herself as Petros' "business rival" and stabs him in the neck. The battle ends with Monica as the victor, and Petros with his throat cut.

Monica makes her way back to Tres and Abel, then proceeds to kill Esther when the nun refuses to surrender. Esther is suddenly saved when Petros springs back up - just as Monica realizes she didn't slice his throat, but the hydraulic cable of his armor. The two continue their fight until Petros finally corners the woman. Petros is about to strike the finishing blow, but it goes right through Monica. Petros realizes that Monica is a witch, tries to strike again, but Monica escapes using her ability to pass through walls.

Monica chases after Esther and Shahrazad on a motorbike. Monica lands on their on their truck and passes through the front glass, then begins to strangle Esther. Realizing she is a shapeshifter and won't relent, Shahrazad uses her ability to shatter the glass that Monica had fused with. Esther and Shahrazad escape from Monica, who is left lying on the ground after the truck crashes.

Monica wakes up later and is confronted by Mr. Butler, who states that he is a friend of Esther and Shahrazad. He introduces Monica to her enemy: a large wolf. As the two fight, Monica remembers how she had been determined to kill Caterina for revenge, but was captured and made to work for her instead. The wolf easily defeats Monica, but before she is killed, Monica slips through the ground and disappears.

"Monica" is an ancient name of North African origin (now Algeria) whose etymology is unknown. It has also been associated with the Greek word monos, meaning "alone". 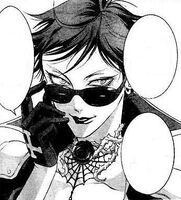 Retrieved from "https://trinityblood.fandom.com/wiki/Monica_Argento?oldid=13183"
Community content is available under CC-BY-SA unless otherwise noted.