Mirka Fortuna, Duchess of Moldova, is the grandmother of Ion Fortuna and a faithful servant of the Empress who holds the rank of Head of the Imperial secret council. In the series, she is probably best known for devising the plot and posing as the Empress Augusta Vradica while trying to draw out the extremists in the Empire and expose them.

In the novels, Mirka was Ion's primary care giver after her daughter (Ion's mother) died during Ion's infancy of an unknown cause [1].

Mirka is a beautiful young woman with long blond hair that she usually keeps down and dark-colored or light-colored eyes, sheappears to be very young for a grandmother, indicating that she must have "awakened" into a Methuselah early in life and Esther Blanchett comments that Mirka is like a female version of Ion Fortuna.

In the novels, Mirka assumes the role of Seth Nightlord with a black wig, as they both have petite body shapes. In the manga, she does not wear a black wig. In the anime, Mirka is shown to to be a tall, curvier woman and does not wear a wig. Her formal boyar (nobility) dress is changed in from a long-sleeved, ankle-length dress into a sweet lolita styled dress in the manga.

Mirka is featured with strawberries and strawberry flowers in her manga portrait, symbolizing a sweet personality, love, happiness, success, and good fortune.

Mirka likes to tease Ion Fortuna and Baybars. She trusts the Empress, who is her friend and she also was prepared to use her grandson as a bait for her and Empress Augusta Vradica's plot.

Empress of the Night/ The Night Lords Arc[edit | edit source]

Mirka is first mentioned as the grandmother of Ion Fortuna. Ion had just secretly returned to the Empire and goes home to find her grandmother, but instead, finds the entire house covered in blood and destroyed automated dolls. He hears a scream and races upstairs, only to find a dead woman's body with an autojager next to it.

After Abel Nightroad grabs Ion Fortuna and Esther Blanchett and jumps out the window to avoid an the explosion, they land in the garden and are surrounded by the Yenceri. Baybars accuses Ion of murder and when nothing can sway his mind, Abel detonates a smoke bomb and all three escape.

Mirka is next mentioned in the dewan (high court). Upon hearing the death of Augusta Vradica (one of Mirka's children) declares she will seek revenge.

Next, "Augustra Vradica" is seen attending the funeral of Mirka Fortuna. Ion attempts to attack Radu Barvon after he sees him mouthing that he will kill her. The boy falls right into Radu's trap as it appeared as if Ion himself was trying to assassinate the Empress. Radu attempts to stab him, but "Augustra Vradica" declares he is not allowed to kill Ion as she has many things to ask him. The boy is sent to prison to be interrogated later.

Later on, there is an explosion during the funeral and "Augustra Vradica" is reported to have died.

Mirka reveals she was posing as "Augustra Vradica" when the real Empress Augusta reveals herself.  Ion is glad to see his grandmother, after believing she had died for so long. After seeing Suleyman's death, Mirka remarks that all men are children to their mothers. The Duchess stays behind while Seth, Abel, Astharoshe Asran, Esther and Ion head out to stop Radu.

One week later, Mirka gleefully explains to her grandson that they had known about the extremists for a long time, but had no evidence to trap them. Ion clarifies whether she meant she had used her own grandson as bait, to which the Duchess replies she did, and then asks if anything is wrong. Ion is comedically vexed at all of this, but instantly backs down when Mirka questions if he was unhappy about her plan. Mirka hugs him and says he just missed an opportunity to let her tease him. Baybars explains to Astharoshe that that was how the Duchess expresses her love. Mirka tells Baybars that she will ask the Empress to stay around her estate more often, prompting the guard's hair to turn white.

Together with Grandmother[edit | edit source]

Mirka is seen sometime later as she observes Baybars and Ion Fortuna sparring. After noticing Ion doing a backflip like a cat, the Duchess orders Ion and Baybars to wear cat-eared headbands. 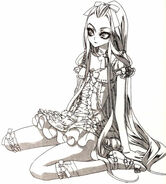 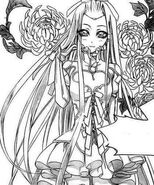 Retrieved from "https://trinityblood.fandom.com/wiki/Mirka_Fortuna?oldid=13387"
Community content is available under CC-BY-SA unless otherwise noted.