Matthaios, also referred to as Brother Matthaios, is a member of the Department of Inquisition. He was an ex-mercenary who was involved in many wars before he entered the Church's service. He is known as the Moroccan Demon for killing thousands of civilians at Gibraltar in the Siege of Morocco. During that battle, he was defeated by Leon, against whom he has carried a grudge ever since.
He has a PhD in Biblical Studies.[1]

Francesco sends him to arrest Caterina on the suspicion of being allied with the New Vatican. After he has taken her into custody and transferred her to the Lateran Palace, he reports to Sister Paula.

He is on board the Jahoel, when Sister Paula informs him of Tres and Abel's intended flight from Rome with the Iron Maiden. To stop them, he orders Commander Cambio to engage in battle, unheeding of the Roman citizens that would die as a result. At first he wants to make it look like the Iron Maiden fired at Rome, so that he could later justify his actions as defense. But after the Iron Maiden contacted them, asking them to negotiate, he orders his men to shoot the airship. Even when Cardinal Borgia is presented as hostage, he does not stray from his intended course, until Sister Paula contacts him with orders from Cardinal Medici to stand down, because killing Borgia would antagonize the Hispanic Kingdom.

He purposely tells Petros that he was going to the city, but in reality, he was just following Archbishop Emanuele d'Annunzio.*

The next morning after Esther Blanchett is kidnapped by a vampire, Brother Matthew shows up to the meeting between the Vatican members and explains that the weapon the vampire used last night. Archbishop D'annunzio asserts such a sophisticated weapon must be an indication that she was an assassin sent from the Empire, which she claimed. Caterina Sforza urges that he should not jump to conclusions as their nemesis has been diplomatic for over a century, but Cardinal Antonio Borgia points out the Empire may feel threatened after they lost Istvan to the Vatican. D'Annunzio tells everyone that all of his troops are already searching for Sister Esther as they speak. Unsatisfied at the lack of experience and proper equipment, Matthew proposes that the Inquisition should help this investigation as well. Although initially reluctant one man could do much, the Archbishop is graciously accepts the help as Brother Matthew explains that he will have three battle ships and five-hundred men within the afternoon. Caterina and Antonio both point out that it is almost as if he had planned an impending war beforehand. Petros pleads to help in order to redeem for his failings from the night before, but Cardinal Medici simply tells him to guard the Pope. Petros reluctantly agrees. Cardinal Francesco ends the meeting with a warning that with the news of a Saint kidnapped by a vampire could spark a catastrophic crusade, and to be prepared.

He arrives near the end of this arc with the men and artillery he promised d'Annunzio. Although the atmosphere is tense as his actions would have decided the outcome, the Inquisitor believes the Cardinal over D'Annunzio and arrests the man. Brother Matthew informs the surprised Archbishop, who had scripted his plan like scenario from a film, that it was flawed because as too cliched, and reveals they had intercepted all his communication for the past two days and Lieutenant Dobo has confessed to everything.

After Shahrazad sacrifices herself so that Esther can become a true 'Saint', Brother Matthew asks if she was alright.

Matthaios is the Biblical Greek form of Matthew. His name is spelled as Matthaios in English in the original Japanese promotional material for the novels, but was rendered as Matthew in some official English translations.

Matthew is based on the Hebrew name Matityahu, meaning "Gift of Jehovah". Like the other members of the Inquisition, Matthaios is named after an Apostle of Jesus, specifically Matthew the Apostle.

Brother Matthew (Matthaios) 2 - Novel
Add a photo to this gallery 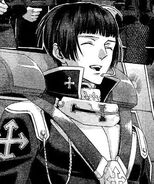 Retrieved from "https://trinityblood.fandom.com/wiki/Matthaios?oldid=13423"
Community content is available under CC-BY-SA unless otherwise noted.