Ludwig II (ルードヴィッヒ二世, Rūdovu~ihhi nisei), also known as the Tyrant King, is the King of the Kingdom of Germanicus (German: Deutschland).

Ludwig was first mentioned by Professor Wordsworth as a possible candidate for inheriting the throne of the Kingdom of Albion, the other being Calamity Jane. Abel Nightroad is shocked, having heard "The Tyrant King" was the one who kept Germanicus from merging with Albion after he was crowned. Abel deduces his country is not fond of alliances.

In order to mar Ludwig's reputation and prevent him from becoming King of Albion, Mary Spencer orders "Jack the Ripper" and "Sweeney Todd" to stage an assassination attempt at Esther Blanchett and Pope Alessandro XVIII as Germanicus soldiers. 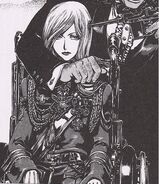 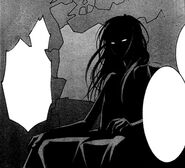 Ludwig II in the manga.
Add a photo to this gallery
Retrieved from "https://trinityblood.fandom.com/wiki/Ludwig_II?oldid=12912"
Community content is available under CC-BY-SA unless otherwise noted.