Lilith Sahl is Krusnik 04 who fought with humans against The Night Lords, supporting the Terrans against the Methuselah during the The Dark Ages. She was killed by Cain Knightlord under the disguise of a truce that her death was the reason why Abel left the war and her body currently resides in a tomb under Rome, where Abel Nightroad mourned her death for 900 years.

In the legends of her in the main events of the series, she is known as "Naia Sancta", meaning the Holy Nymph in Latin, and also The Black Saint.

Lilith is a tall woman with long red hair, yellow eyes and she has two different skin colors in the anime and manga.

She is shown wearing light-colored clothing and earrings in her youth and wore more jewelry as she aged.

In the novels, Lilith is shown to have six blue wings while in 80% activation, and four white wings during 40%. Her wings vary in color between artworks. In the novels and manga, she is of Indian ancestry, occasionally wearing a sari and henna tattoos. She wields a sword and is depicted holding a sword to demons in the Vactican frescos.

Her arcana in Thores' tarot cards is The World.

Lilith shown to be a caring and nurturing person who tried dissuade Abel Nightroad from trying to kill the humans even during the war.

In the novels, she is a brilliant strategist who is known for taking the side of the humans, eventually helping them win the war.

Lilith was the prototype for Cain Knightlord, Seth Nightlord and Abel Nightroad, the genetically-enhanced beings created to be leaders of the Red Mars Project by the UNASF. As one of the leaders, she was in charge of the Department of Medicine/ Health Care, ranked Lieutenant-Colonel, the same rank as Abel.

During the Red Mars Project, several colonizers, who did not like Abel, lured him into the Martian wilderness. Just as Abel was about to die from oxygen deprivation, Lilith rescues him, however, Lilith’s vehicle broke down on the way back. It was during this time that the two found a highly technologically advanced space ship, later known as "The Ark," as well as the Kudlak Bacillus and Crusnik Bacillus inside.

After witnessing such events, Lilith also infused herself to help the humans, becoming Crusnik 04. Her departure from the newly-built Ark caused problems, as it required the four to operate it. She contacted Pope Gregorio XX,[1] supplied the humans with technology and electricity to places including Budapest and Istvan. Lilith also commanded the army, and defeated the army led by Cain, Abel and Seth in Paris.

As the humans were about to win the war, Cain offered Lilith a truce. Lilith met him in The Ark, only to discover that Cain never intended to offer a truce, but wanted to kill her instead. Lilith fought Cain and heavily wounded him, but loses all of her Krusnik nanomachines and dies in the process. Her death enrages Abel, and he together with Seth, pushed Cain from the Ark and down to Earth. Lilith's body was then taken to Rome, where she was buried, and Abel mourned her death for nine hundred years before continuing her legacy.

Lilith knew she would die, but still believed in Abel's humanity, and gives him one last chance to turn back in her message under Cathargo.[2]

At the end of the first book, Lilith is briefly mentioned as Abel Nightroad's lover by Seth Nightlord. [3]

Manga and Reborn on the Mars Novels

The Trip to the Vatican

(Manga and drama CD only)

Abel Nightroad is briefly reminded of a vision of Lilith when he is thanked by a methuselah.[4]

The Iblis / Angel of the Burning Sands Arc

Abel Nightroad sees Lilith in a pre-recorded hologram in the undergrounds of Carthago as he tries to shut down the Iblis to save the city. Elissa Dal Schleid ("Elissa Dar Shrite" in the novels), Queen of Carthago, and Lilith created the Iblis, the Angel of Desert, as a sandstorm to protect Carthago from its the invading Methuselah. Lilith sadly tells to Abel that she along with Elissa would've preferred to bury the town than handing it over to the Methuselah "returners". However, she reveals to Abel that she made a bet with the Elissa that Abel had some humanity still left in him: If he could spare just a single human and bring him or her here, Lilith would've won the bet and Abel would be able to shut down Iblis and save himself.

Before she disappears, Lilith tells Abel that she knows that he only became Contra Mundi because he loved, believed, and was betrayed, but he still loves this world and the people in it. She reminds him that it is never too late to start over. Believing there were no humans there, Abel collapses in despair with visions of Lilith until Esther Blanchett saves him, and is initially stunned at their resemblance. As Abel and Esther deactivate the Iblis, Abel is reminded of Lillith's last words.

Empress of the Night / The Night Lords Arc

Abel Nightroad is reminded of Cain Knightlord of Lilith's murder as he fights Dietrich von Lohengrin. The memory enrages Abel, who Radu Barvon's puppet body with his scythe.[5]

After hearing Esther Blanchett's speech, Abel Nightroad briefly mentions to Lilith that there was someone who preaches the same values of peace and equality as she did.

The Throne of Roses Arc

When Abel Nightroad is recuperating from an attack in the underground Ghetto of Albion, a young Lilith appears in Abel's flashback, back when they were teenagers. Abel is handcuffed and imprisoned as punishment. She questions why he would have tried to activate "that thing" in B-VI, and asserts that had he thought his actions might have destroyed London, he would not have done what he tried to do. Abel denies that, stating that was precisely why he wanted to activate it. Abel appears to be delighted at the idea of killing everyone there. Lilith tries to reason that those people were also human like them, but to no avail. She listens to Cain Knightlord as he talks to Abel about taking control of their own destiny.

The Crown of Thorns Arc

When Cardinal Caterina Sforza is informed of Abel Nightroad's death, Lilith orders Hercules Tres Iqus to go to the underground of Rome, where Lilith was buried.

Lilith's background as written in the DVD booklets of the anime states the following:

The experimental test unit created by the Nightroads. To the colonists, she holds the next highest rank after them. She is the only one who understands Abel's wild heart. She is the fourth "Crusnik" after the Nightroad siblings. She has a very motherly personality and Abel Nightroad cared deeply about her.

Her profile from the anime DVD series states the following:

Hollow Woman Lilith
Because of certain bacillus that were brought back from Mars, the people of Earth mistake the people returning from there as "vampires" and begging massacring them, which causes the Nightroad siblings to turn on humanity [sic]. In order to stop the three of them from massacring millions in retaliation, Lilith goes over to the side of humanity. This is what is recorded in the Vatican's history books as the "advent of the angel". She was a "holy woman" to humanity. She tried to show humanity the way, but Cain mercilessly murders her. Because of this, Abel realizes his mistake and throws Cain from the "ark" to the surface of the Earth, but...

Her corpse is interred in the underground graveyard beneath Rome.

A deceased Lilith briefly appears in Abel's flashback. Near the end if the series, she is shown to be buried in a tomb under Rome, which was accessed by Tres Iqus in order to save Abel.

A hologram of Lilith from ROMIII: The Iblis novel

Lilith tarot card by Thores.
Add a photo to this gallery

Lilith's RMP past flashback
Add a photo to this gallery 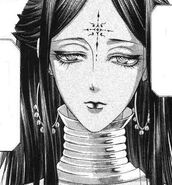 A hologram of Lilith

A young Lilith from ROMV: Throne of Roses