Leon Garcia de Asturias, codenamed Dandelion, is a male Terran priest and AX agent of the Vatican Ministry of Holy Affairs. Prior to his service in the Vatican Papal State, Asturias was a decorated professional soldier noted for his bravado attitude, but was sentenced to a thousand year prison term for the murder of his wife and thirty clergymen. The length of his sentence is reduced by a couple of decades every time he assists the AX, which he is allowed leave for. He is imprisoned in the Vatican's orphanage.

Asturias takes great offense at being called an old man, but despite his gruff exterior he possesses a sense of compassion for others, especially children. During the Never Land Incident, a mission which Asturias undertook with the aid of fellow AX agent Abel Nightroad, he chose to spare a group of artificial Methuselah orphans by sending them to the Kingdom of Albion.

Though technically a clergyman—albeit a "conscripted" priest rather than a voluntary one—Asturias has a penchant for flirting with women.

Leon has messy dark brown hair and, in the manga, wears sunglasses. He also has a little stubble on his chin. Also, while riding with his motorbike, he wears a leather jacket, but no helmet. He also wears a giant cross around his neck that hangs near his waist, and a locket with a picture of his beloved daughter, although her current status is unknown.

Leon wields sharp silver chakrams, with which he uses to cut his enemies in half. Leon carries them around his wrists as a sort of bracelet. In the novels he has a bazooka, and specializes in sabotage and guerrilla tactics.

Leon's manga portrait features him with a sun, lion, dandelion, and a chain and ball. The lion and dandelion is a reference to his name, whereas the chain and ball are symbolic of his status as a prisoner. His arcana in Thores' tarot cards is The Hanged Man.

Leon offers his condolences to Abel Nightroad after the death of Noélle Bor.

In this manga-only chapter, Leon is first shown while riding his motorbike through the land, having been released from prison to help out the AX. He ignores the orders of someone speaking to him on the radio and stops to refill his petrol. He asks a local if the new nun is cute.

Esther, meanwhile, is being chased by a group of criminals when she trips and is caught by Leon. Mistaking Leon for one of the thugs, the nun thinks she is done for, when all of a sudden Leon lifts her up onto his shoulder and defeats the men pursuing her. The two escape but then fall into a canal.

Later, Leon buys Esther some new clothes. A clerk asks if she is his daughter; Leon corrects him, stating that Esther is his lover. As they walk around the town, Leon asks why she was looking for trouble in the first place.

Esther tells him that she was looking for someone, Leon asks if it was her boyfriend, but Esther denies this, and explains that it was the exact opposite. Leon understands and likens love and hate as two side of the same coin, then asks if Esther had anyone she can rely on. The nun remembers that she does, to which Leon remarks that she is "too good for that airhead," much to her confusion.

Leon reasons with her that nothing can be done until dawn, because the city has been transformed with the arrival of a new vampire, who controls the city with opium. The two are interrupted by gun fire and decide to run. Esther tells Leon that her hometown was run by a vampire too. Leon asks if it was Hungary, to which Esther confirms, but adds the vampire realized his mistake and does not know where he went wrong. The nun informs Leon that she is looking for an answer to just that.

Esther explains at the moment, she is weak and needs protection, but there are things she wants to do. Leon is impressed and gives her encouragement, calling her "second best woman in this world." All of a sudden, a bullet strikes Esther's new friend. Esther is shocked and shoots at the criminals with her concealed gun, but the leader catches the bullets easily and threatens her with death, prostitution or rape.

Tres and Abel run to the rescue, shooting the guys and saving Esther. Esther runs over to the gravely injured Leon, who asks if the next time they could have a date that would last till dawn. He is about to introduce himself to her, when she is yanked away by the vampire, who threatens to kill Esther if Tres and Abel would not throw away their guns. Esther, realizing the situation tells Tres to shoot, but Leon tells them to stop. He uses his chakrams to slice off the boss vampire's hands, saving Esther. Leon then officially introduces himself as an AX Agent, to Esther's shock and surprise.

The next day, Leon holds Esther on his lap as he informs Abel that he was sent to help them after being informed of their poor performance on their recent missions. He sympathizes how she was around "two idiots" and Esther agrees, then asks if it was alright for her to go to Rome. Leon reminds her that she said she had something to do, and asks her if she had any regrets. The nun sternly replies she doesn't and thanks the priest. Touched by her determination, he hugs her, much to the comedic dismay of Abel and Tres.

Leon holds his hand out to Abel, but then pulls the priest down by his head and warns him to keep his distance from Esther, who promised him a date that would last till dawn. Esther is shocked and embarrassed while Abel humorously looks on with horror.

Former AX member Father Leon is offered a shortening of his prison sentence in exchange for his aid on a mission. He joins Father Abel Nightroad in investigating recent vampire attacks on various ships that were traveling near the Kingdom of Albion. The investigation brings the two to Never Land, an island where a Professor Barrie was running an orphanage and illegally converting the orphans into fairy-like vampires through experimentation. Currently, the island is inhabited by only children, who are under the leadership of Wendy and her friend Peter, on whom the experiments failed to work. When Wendy and the other children try to kill Abel and Leon, Peter helps the two but is in turn attacked by Wendy. During the ensuing battle, Leon destroys the Tinkerbell System, which had allowed Wendy to control the other children with her thoughts. When Leon moves to kill Wendy, Peter protects her; it is then that Wendy realizes that she was mistaken in her animosity toward adults. Not wanting the children to be killed, Abel and Leon charter a cargo freighter for them that is bound for Albion.

Leon's name is written as "León" in the novels. It is derived from the Greek λέων (leōn) and it is also the Spanish word for "lion".

García is a Spanish and Basque surname. It is thought to have originated from Basque adjective meaning 'young', (whose modern form is gaztea or gaztia), and which is also the source of the French word garçon 'young man'. Other possible origins include Germanic word wars "young warrior" or the Gothic garxa or garcha "Prince with a graceful sight", indicating that it was common before the Muslim invasion as a name already existed in other Spanish regions. The first references to this surname dates back to 843, in the appointment of Ramiro García, Governor of the city of León.

"De Asturias" means "of Asturias." Asturias is an autonomous community in north-west Spain. 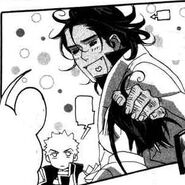 Retrieved from "https://trinityblood.fandom.com/wiki/Leon_Garcia_de_Asturias?oldid=13421"
Community content is available under CC-BY-SA unless otherwise noted.