Jane Judith Jocelyn, also known as Calamity Jane, is the Duchess of Erin (Ireland) who is a lieutenant-general of the Albion Navy, Vice Chairman of the National Treasury, Executive Secretary of the Liberal Party and Head of the Jocelyn Group.

Jane is a beautiful young woman with curled dark black hair, blue eyes and a beauty mark near her lip on the left side. She is usually seen wearing expensive, dark-colored dresses. Her admiral uniform is similar to Mary Spencer's.

Jane's manga portrait features her with an Irish hound, a reference to her home country (Erin/ Ireland) and loyalty. In the "Alice in Wonderland" portraits, Jane represents the Cheshire Cat.

Jane is an extremely flirtatious and feminine individual who is also capable of being serious with secretive motives.

Jane is first mentioned by Professor William Walter Wordsworth as a possible heir for the Albion Throne, the other being Ludwig II. Professor Wordsworth explains that Jane is a highly influential even among the elite, her titles include: Vice Admiral of the Albion Navy, Vice Chairman of the National Treasury, Executive Secretary of the Liberal Party, Head of the Jocelyn Group (the largest conglomerate in Erin, which controls a portion of the Albion Navy and Parliament) and "a lifelong member of the elite". Not only just a successful entrepreneur, she was also famed for the eradication of piracy and border disputes with Hispania.

Despite her reputation, many aristocrats oppose the idea of handing throne to a person whom is independent from Albion, and her dislike of the church meant she did not have the support of Rome either. Furthermore, Jane had been embroiled in several scandals, including adultery, homosexuality, and seven marriages; all of which ended when her husbands' deaths, leading to the suspicion that she poisoned them herself. Mary Spencer later introduces Jane to Esther Blanchett, explaining they had attended military academy together and have been friends for ten years. Jane introduces herself, and then unsettles Esther by praising her appearance. Esther nervously replies she does not deserve such praise, but Jane seductively flirts with her, completely shocking the nun. Jane offers to join Esther for the night as the nun attempts to flee, but Mary stops Jane, much to her disappointment.

Jane, under the disguise of a civilian, is next seen accompanying Esther, the Pope Alessandro XVIII and Mary to a horse race. Jane shocks Esther by using innuendo, but is interrupted by the Pope, who escapes with Esther after feigning a stomach ache.

Jane intervenes Janethan Montagu Douglas, the Duke of Buccleuch as he blames Mary Spencer for the failed extermination of the Ghetto vampires. Jane puts the blame back on him and everyone else who signed the operational plan. The Duke of Argyle disputes this, claiming the colonel hadn't followed the plan that was set forth. Jane suspiciously wonders if the Duke held a personal grudge, but is interrupted by Mary, who admits responsibility. Jane closes her eyes as Mary sadly admits she had prioritized the lives of her subordinates above the mission. The topic soon falls on the succession of the Albion Throne. Jane asks how Esther Blanchett is doing, while noting how the two sisters resemble each other. Mary explains Esther is hidden in Windsor Castle, to Jane's surprise, who had expected Esther to be a stronger person like Queen Bridget II. Mary informs Jane not everyone is as strong as Jane is. Flattered, Jane responds Mary is the same; a requirement for being Queen.

Realizing Esther would not be suited for the palace, Mary informs Jane that she will be the new Queen, Jane rebuffs this, claiming she is more suited as the manipulative "wicked witch" who can't stand the ascetic life. Jane then offers her full support for Mary, arguing her devotion to Albion far outweighs her illegitimacy. Mary thanks Jane for her support before they are interrupted by a messenger bringing news of Queen Bridget's worsening condition.

Jane remarks the inevitable has happened, and that Mary should be emotionally prepared to farewell her grandmother. Mary asks Jane to go on without her so she can pick up Esther, to which Jane agrees, commenting that there is nothing more fitting.

As Mary comforts a grief-stricken Esther, Jane interrupts them, bringing news that the secret behind Esther's identity has been leaked to the media. Mary demands to know how it happened, but Jane denies knowing anything. Jane appears to have a somewhat smug expression as she claims the culprit was no ordinary person. The three of them head out while their body-doubles distract the crowd.

Sometime later, Jane is seen in the back of her car after going to her residence to pick out jewelry for Mary to wear to the funeral at her request. The Duchess begins to write in her diary when a blotch of ink suddenly drips into the book, all leaking through several pages. Jane flicks through the pages when suddenly a name catches her eye. With the help of a young girl named Cheryl who was also in her car, Jane quickly realizes there was a pattern. Every time the Queen's condition worsened, it was shortly after a visit from a particular visitor: Mary Spencer. The car is suddenly ordered to halt by a soldier on the orders of Mary Spencer, but when Jane refuses, the man pulls out a gun. Jane flicks her fan at him, stinging his eyes. The car quickly drives and escapes through the road block while sustaining several bullet holes; however, their victory is short lived when a tank suddenly rolls over to them. Out of nowhere, a flying car appears and rains bullets down. A flustered Jane orders people to take cover.[1]

Professor Wordsworth steps out of his car and introduces himself before requesting the assistance of Jane's former army, the 5th Regiment. Jane is reluctant as the prospect of sending her private army to war, but William argues that the recent events within the capital are not mere incidents. Mary is seen surrounded by soldiers as William explains that everything is a coup d'etat.[2] 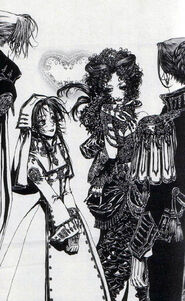 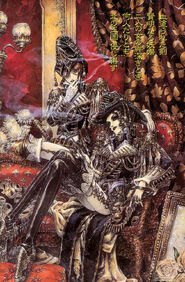 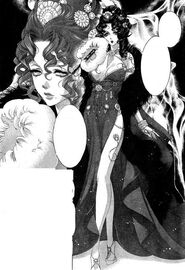 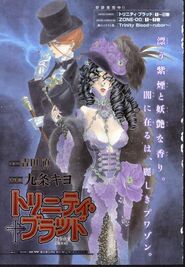 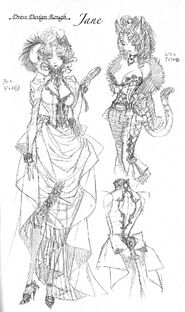 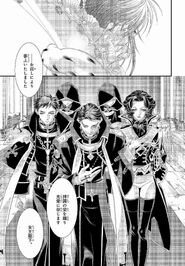 Retrieved from "https://trinityblood.fandom.com/wiki/Jane_Judith_Jocelyn?oldid=13247"
Community content is available under CC-BY-SA unless otherwise noted.