Sergeant Jack Ironside, also known as Jack the Ripper, is a deceased member of the former 44th Regiment who died during the Percy Rebellion two years before the main events of the series. He currently serves under Mary Spencer under the Phantom Legion, and will do anything to ensure she becomes Queen.

Jack is bald, appears to be middle-aged, and often wears long coats and hats. Compared to Sweeney Todd, he is skinnier and taller.

He has had several prosthetic arms artificially attached to him.

Jack's manga cover shows him reversed to Sweeney Todd, set out like a poker card, a reference to the Alice in Wonderland theme of this manga arc. The two hold knives and are divided by yellow roses, symbolizing Mary's envy.

Jack first appears when he attacks Abel Nightroad in a dark alley at night, after the priest saves a prostitute Jack was about to kill.

Jack later kills another prostitute just before Petros intervenes. Jack manages to fight off Petros by spitting razors from his mouth before jumping out a window. The prostititue manages to tell Petros that her friend Michelle Lee is next before passing away.

Jack and "Sweeney Todd" attack Esther under the guise of Germanicus soldiers. The two inform her that they have come to rescue her, but Esther suddenly snatches their guns and aims it at them. The nun explains she deduced they were not Albion soldiers based on the guns they were carrying. Todd takes off his helmet and reveals them both to be living corpses, then proceeds to kill Esther. Their plan fails when Cain Knightlord shows up and saves Esther.

Jack and Lance Corporal Cunningham ("Sweeney Todd") appear before Mary Spencer as she is contemplating. Furious that the two of them had tried to murder Esther and Pope Alessandro, Mary demands an answer. The two men admit they did try to truly murder Esther, instead of staging a failed assassination by Germanicus as she had ordered them to, because they wanted Mary to be Queen. The two blame the death of the Forty-forth Regiment on the of Twenty-Six House Lords in the past. On the urging of her subordinates, Mary agrees now was not the time to dwell in the past, but to consider the future of Albion. [1]

Jack is later mentioned by the William Walter Wordsworth when he informs Kate Scott that the person who attacked him and Esther earlier was an artificially strengthened soldier by the name of Sergent Jack Ironside. Jack Ironside supposedly died two years ago in the Percy Rebellion along with the rest of the 44th Regiment. His funeral was arranged by his supervisor, Mary Spencer, but the church has no burial records of him or any other of the more than one hundred members of the 44th Regiment. [2]

Jack is seen organizing a team to ensure they know who the target is. Later on, Esther stumbles upon a room of dead bodies and is grabbed by what seems to be a vampire. Esther manages to grab her shotgun and take him hostage, and deducing that these 'vampires' are humans in disguise, who have murdered the other people in order to frame the Ghetto Methuselah. Jack appears and proclaims it is exactly like she says, before adding that it is regrettable, as she would have been a wise ruler if she had become Queen.

Esther recognizes Jack the Ripper as the Germanicus soldier who attacked her when she was in the Ghetto. The nun demands to know why he was disguising Germanicus assassins as vampires to murder her, but Jack corrects her that they were not from Germanicus, but were part of the "Phantom Legion", an army of the dead. Corporal Hart asks Jack whether it is safe to proceed with the murder without orders from 'Her Majesty', but Jack offers to take responsibility, knowing Mary is too kind to allow this to go through. Jack explains to Esther that Mary is the Queen of the Dead, before Corporal slams her into the ground. The nun feels something strange, but Corporal Hart is too preoccupied explaining his prosthetic arm to notice. Jack steps on Esther and sends her his farewell but before he is able to raise his blade to stab her, his hand is burned by acid. The rest of the Phantom Legion is in shock as massive tentacles appear from under Esther's robes. It slides out, spitting acid at the group. Esther, too, is horrified, but manages to convince herself to take the opportunity to run. The nun leaves to tell Mary her grandmother loved her, and that she is the next Queen.[3]

"Jack the Ripper" is a famous unidentified historic serial killer, who murdered several prostitutes in the Whitechapel district of London in 1888. 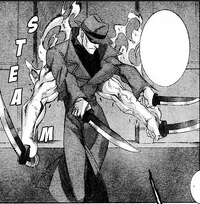 Retrieved from "https://trinityblood.fandom.com/wiki/Jack_Ironside?oldid=11038"
Community content is available under CC-BY-SA unless otherwise noted.