Hugue de Watteau is a male Terran priest and AX agent, codenamed Sword Dancer. He wields a blade-staff as his weapon and his artificial limbs grant him to speed and strength to easily match an average vampire in a fight. He also has superior analytical skills.

Hugue was born to a noble family that had kept the position of Chief Inspector for generations, and subsequently held the largest military power over the Netherlands that had no actual national military. His whole clan was however wiped out by vampires at Burges nine years before RAM I: From the Empire, leaving Hugue without his arms. Anaïs de Watteau (Hugue's younger sister) was presumably kidnapped during this incident.

Hugue is motivated by revenge and often defies orders to search for his little sister as well as his family's murderer.

Hugue has long, wavy blond hair, green eyes and he often keeps a face that spells indifference. He has many scars on the upper half of his body, presumed from past fights with vampires. His weapon of choice is a staff with a hidden blade inside it. Hugue is an extremely strong and fast man that can easily match the average vampire in a fight.

Hugue's manga portrait features him wrapped in barbed wire, symbolic of suffering and confinement. His arcana in Thores' tarot cards is The Death.

The Iblis / Angel of the Desert Arc[edit | edit source]

The Very Center of the Blue Storm[edit | edit source]

Ion Fortuna, Esther Blanchett and Abel Nightroad continue their journey towards the Empire by boat. In the novels, it is only mentioned later that their boat was attacked by pirates. This was expanded the manga.

Ion, dressed into Terran's commoner clothes used in the Empire to conceal his identity, leans against a railing while speaking to Esther, when someone suddenly grabs his hand. Ion pulls the unconscious man onto the ship. Abel shows up and recognizes the man as Hugue de Watteau. Ion is hides when the priest wakes up, calling him Anaïs. Hugue explains that he was out on the sea while pursuing pirates, reminding Abel that he had run into one of them too, Angelina "Shark" Jolie. Father de Watteu tells them that the ship that the pirates sail is surrounded by a blue ball that repels sunlight, the same thing that surrounds The Empire, indicating that the crew is made up of Methuselah. Ion doesn't like the sound of this and wishes Father Hugue good luck in catching them. Suddenly, someone knocks over a bomb and blows the ship up.

The pirates kidnap Esther and Abel while Ion and Hugue fall into the ocean. Ion tries to go after them, but Hugue stops him, telling him that the Methuselah are not going to use Esther's blood after she had inhaled in so much of the smoke. He also mentions that Abel was there, feigning his loss of consciousness. Hugue then grabs a hold of Ion's leg to inspect his wound. Ion wonders where his strength came from, which Hugue reveals that it is a mechanical arm, having lost his real arm to Methuselah.

The two make it to the pirate ship and take down the crew. Ion yells out loud for Abel to hear that he is to protect Esther and will not allow anything bad to happen to her, or he would kill him. Hugue is challenged by the ship's captain, who stabs Hugue, almost killing him until Ion rushes over to rescue him. Ion demeans the Captain for using a hook during a sword fight, calling him a "worthless scum" that was "truly [befitting] the label 'vampire.'" The captain is surprised Ion would side with the Terrans, mentioning his own childhood friend - a Terran - had sold him out to the Vatican. The boy is briefly reminded of Radu and decapitates the Captain, calling Hugue his comrade. As he dies, the pirate admires the way Ion had worded it, but reminds him not all Methuselah agreed with him. Ion acknowledges this, and is about to collapse from exhaustion while muttering the name "Radu Barvon", when Hugue catches him.

The two set Esther and Abel free. Father Hugue leaves soon without saying bye, and Abel remarks that he is always like that. Ion asks who this Anaïs is, and Esther says that he called her that as well. Abel explains that it was is the name of his sister, and that he calls every girl he meets that. Ion is in shock. The three of them continue the rest of the way to the Empire on the pirate ship. Hugue is seen in the distance, rowing himself away on a raft.

Hugue appears the side stories of every book in the Rage Against Moons novels.

Hugue was sent to investigate a vampire attack that had killed several clergy members in Amsterdam. Hugue was able to kill the vampire that had tried to capture Sister Agnes, the only survivor and also Hugue's distance cousin, but was soon captured by minions of Count Karel van der Verf. Hugue is chained to a pit and was about to lose the fight until Sister Agnes retrieves his weapon for him. The nun is subsequently stabbed by Count Karel, infuriating Hugue.  Karel reveals that Jan van Maylen, a Terran childhood friend of Hugue and kin of the Watteau family, hired them to attack the Watteau clan. Before Karel is able to say who attacked the house, a masked man, possibly Count Gie, kills Karel. Hugue was about to chase after him, but decides to stay to help the unconscious bleeding nun instead.

Hugue returns to the Vatican deliver the Rosenkreuz Orden's plans to destroy Rome, and then aided the AX Agency in the battle against the renegade Archbishop Alfonso d'Este. He later travels to Albion to help the Vatican's forces destroy Isaak Fernand von Kämpfer's ship.

Jan van Maylen (Hugue's childhood friend and kin of the Watteau) was the one hired the vampires to destroy the Watteau Clan Jan came from a third class noble family and desired the title as Chief Inspector of the Four City Alliance, a position long held by the men of the Watteau Clan. Hugue manages to find Jan but does not kill him, instead, he asks Jan to go to the church where they first met.

At the church, Hugue finds Jan's former lover and Rachel (Jan's current wife) who tries to dissuade him from killing her husband, but to no avail. Memlink of the Count Four was the vampire who had framed Karel for the attack on the church in Amsterdam. Believing that Jan had intended for AX Agent Hugue to kill him at the church, Memlink tries to kill Jan. However, Hugue manages to kill Memlink before this could happen. Jan pleads for forgiveness, but Hugue vows to return to carry out his revenge after he kills the remaining two Counts, Gie and Darsus. William Walter Wordsworth described Hugue as "His incompetent student" in the final light novel in the Rage against the moons series.

Hugue appears in the anime with Sister Agnes de Watteau, who is not revealed to be his distant cousin. Similar to the novel, Hugue is also chained to a pit, but he is forced to fight a werewolf and almost loses until Agnes throws him his weapon. Hugue kills the werewolf and then Count Karel after Karel stabs Agnes.

He also makes an appearance in the Silent Noise arc.

Hugue is the French form of Hugh. It derives from the Germanic element hug, meaning "heart, mind, spirit". It was common among Frankish and French nobility. 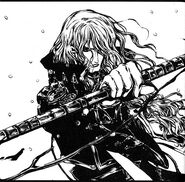 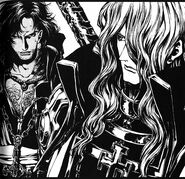 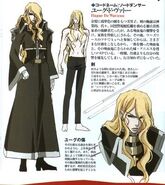 Retrieved from "https://trinityblood.fandom.com/wiki/Hugue_de_Watteau?oldid=13417"
Community content is available under CC-BY-SA unless otherwise noted.