Gyula Kádár (ジュラ・カダール) is the Marquis of István who ruled from behind the scenes, acting as a dictator through his own military police force, even though the city itself appeared to be neutral territory.

Gyula was secretly was working on achieving revenge on the Vatican Papal State for killing Maria (Gyula's beloved wife), who was burned to death for being married to a vampire.

Gyula possesses the power of "haste," as all Methuselah do, as well as a special ability that allows him to grow sharp appendages from his abdomen, that may be related to his ribcage. These appendages have a certain arachnid-like quality to them.

His manga portrait features him tangled with roses and thorns. The red roses symbolize love, loss and sacrifice, while the thorns represent the agony he has suffered.

His arcana in Thores' tarot cards is The Cup.

Gyula is portrayed as a gentleman, eloquent in his mannerisms and speech, but holds a deep grudge against the Vatican Papal State, who were responsible for the death of Maria (Gyula's beloved wife). For this reason, he desires revenge against members of the church, whether they are related to the killing of his wife or not.

Count Gyula was the Methuselah ruler of István along with Maria (Gyula's beloved wife) and she was a computer genius who loved the Church and frequently visited the town to care for anyone in need. After his wife was murdered, Gyula was filled with hatred and consumed with the desire for vengeance against the humans, who had killed her for being married to a vampire. He became a dictator, ruling István with an iron fist through his military police force. He only tolerated the presence of Saint Matthias Church because it helped him keep the people under control.

Reborn on the Mars I: The Star of Sorrow[]

Gyula is welcomed back to István after returning from the Empire, who had declined his request to help his plans against the Vatican.

After being wounded from fighting Abel Nightroad, Gyula shields Esther Blanchett from the gunfire of one of his men. The girl asks why he would do this and he replies that he doesn't know, then confesses all he wanted to see was her face smiling again. Realizing Gyula was envisioning Maria as he stared at her in his last moments, Esther thanks him and tells him he has done enough.

Six months after the incident, Esther buries Gyula in an unnamed grave, violating the Vatican law, and decides to find answers before she can decide whether she hates him or not.

The Star of Sorrow Arc[]

Gyula sends a vampire to attack the clergy of the church. When Abel Nightroad stops the vampire's homicide in the chapel, Gyula sends his troops to attack the church again during the funeral for the people killed the night before. Father Nightroad, Sister Esther Blanchett and Dietrich von Lohengrin rush to Gyula's home to stop him from using the "Star of Sorrow", a piece of lost technology that Maria restored, to destroy Rome. After revealing that Dietrich had been betraying both Esther and Gyula, Abel and Esther are able to stop the satellite. Gyula, mortally wounded from fighting Abel, shields Esther from the gunfire of one of his men. He offers to allow Esther to kill him for revenge, but she declines and holds him while he dies.

Gyula appears in Esther Blanchett's flashback as she recalls the events of the Star of Sorrow arc. She explains that at the time, she they had to kill each other because they thought it was the only way for them to survive. However, she has realized it was all because of a misunderstanding and that both Terrans and Methuselah are humans.

The Crown of Thorns Arc[]

Esther Blanchett reminded us of Gyula's deaths as one of the events that changed her life.

The Star of Sorrow arc of the anime has some significant differences from the original novels and manga, particularly regarding Gyula's actions. In this version, he has Bishop Laura Vitez murdered for refusing to run the church according his orders, then later has the church burnt to the ground. Gyula captures Father Abel Nightroad and Sister Esther Blanchett and forces them to watch as he activates the "Star of Sorrow.” After being defeated, Gyula uses a dagger to kill himself so that he could die in his own home, rather than spend his life in the Vatican dungeons. As he is dying, he offers Esther the chance to take vengeance for Bishop Laura, but she refuses and comforts him in place of Maria (Gyula's beloved wife).

His historical role model is János Kádár, a hungarian communist politician. The Kádár-Era (1957-1989) got his name  after him, a kind of dictatorship under his direction. 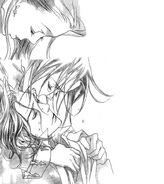