Guderian, codename Reißzahn. He has only spoken once in all his appearances. He works as Isaak's chauffeur and bodyguard. He is apparently a werewolf, a possibly sub-race of Methuselah.

Guderian is later seen as Isaak's chauffeur when he saw Esther tries to steal their car.

Not long after, Guderian is shown after transforming into a large, ferocious wolf; roughly the same height as Isaak and his own head is the same size as Monica Argento's torso. He possesses incredible reflexes. During his short fight with Monica, he was able to catch her knife in his mouth and break it, after which he nearly tore her arm off before she retreats. Guderian is able to speak English while in his wolf form, telling Monica to "die" before nearly killing her.

The Throne of Roses

Guderian is recognized by Clement when posing as Michelle Lee's husband in the hotel. The two run into an elevator when a blackout occurs. However, Jack the Ripper assaults him from behind and the two fight. Guderian loses the battle and disappears.

He fights later with William and Vanessa and loses again, but William lets him go. 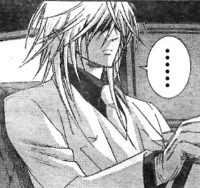 Guderian was named after [1], a Nazi general.

Retrieved from "https://trinityblood.fandom.com/wiki/Guderian?oldid=12666"
Community content is available under CC-BY-SA unless otherwise noted.