Enderles Kudza, Count of Zagreb, is considered the Empire's worst mass murderer as he has impaled over 300 Terrans and relentlessly slaughtered many others in various ways. Boyish in appearance, Enderles is purely evil who was exiled from the Empire and he formed an association with the Rosencreutz Orden with Isaak Fernand von Kämpfer acting as his contact. At the Orden's request, he goes to Venice for the purpose of murdering the Pope, however he goes on another massacre spree, killing dozens, in hopes the Empire would send Astharoshe Asran after him. Having once killed her partner by using Astha as a shield, he enjoys tormenting her with that knowledge and repeats the scene by using a child as his shield, then killing the little girl the same way he killed Astha's partner.

When fighting, Enderles protects himself with an Aegis shield, a series of orbs that forms an impenetrable shield around its wielder. A powerful defense system, the Aegis only weakness is that while activate, the person using it is also unable to attack and must drop the shield to make an offensive move. Astha, partnered with an AX Agent named Abel Nightroad, finds Enderles, but he escapes their grasp and Astha, letting his constant taunting get to her, causes massive casualties among the humans. The pair realize his real purpose for being in Venice, however, and set up a trap for him. Astha belittled him in order to infuriate him so he will drop his shield and attack her, giving Abel the chance to wound him with a silver bullet. He is arrested, but while he is being transported back to the Empire for his trial, Kämpfer frees him, then kills him.

In the anime series, Enderles' name is changed slightly to Enderle Kudza. His appearance is greatly modified, giving him an older, more adult appearance rather than the childlike appearance described in the novels. The more gruesome details of his crimes, particular his multiple murders of children, are also not mentioned, nor does the anime reveal his connection to Rosenkreuz and his death is mentioned as a result of his wounding by Abel Nightroad.

Endre in the anime 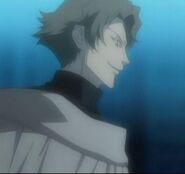 Endre is the Hungarian equivalent of Andrew. The English novels renders his name as "Endre Kourza".

Retrieved from "https://trinityblood.fandom.com/wiki/Endre_Kourza?oldid=13230"
Community content is available under CC-BY-SA unless otherwise noted.