"A few hundred years ago, after the vampires generally had been expelled from the human sphere, Inquisitors literally became the fangs of the church: They brandished their swords against enemies, like heretics, terrorists, and those antipathetic to the church. Certainly, anti-vampire and counterterrorist professionals were perfectly suited for this duty."
―Trinity Blood: Reborn on the Mars. Volume II: The Iblis.

The Department of Inquisition (教理聖省異端審問局,Kyōri Sei shō itanjinmon-kyoku), also referred to as the Inquisitorial Department, the Bureau of Inquisition, or simply the Inquisition, is a special division of the Ministry of Vatican Papal Doctrine—the department responsible for promulgating and defending the creed and doctrine of the Catholic Church. Its membership consists of elite warrior monks, known as Inquisitors, who serve the Ministry of Doctrine as the chief enforcers of the Catholic faith. Their reputation as a group of uncompromising hardliners—dedicated to the Vatican and committed to their duty without question—has earned them the nickname "Fangs of the Church."

The Inquisition headquarters is based in Rome, the capital of the Vatican Papal State. Due to their status as an elite order of holy warriors, the Inquisition is tasked with the duty of providing security to high-ranking members of the clergy—such as the College of Cardinals and especially the Pope. As such, Inquisitors are often stationed in the San Pietro Cathedral and other key areas of Vatican City, especially during important ceremonial events that involve the Pope and leading members of the Church. Despite their primary role as a domestic force, as well as their association with the domestic-based Ministry of Doctrine, Inquisitors can also be deployed outside of the Vatican's territory, but only to provide security to clerics of high rank such as the cardinals or the Pope.

Inquisitors are led by the Minister of the Inquisition, although they also work directly for the Secretary of Vatican Papal Doctrine; since 3055 AD, both offices have been occupied by Cardinal Francesco di Medici. The highest ranking officers within the department are the Chief and Vice Chief of the Inquisition. By the early 3060s AD, Brother Petros served as Chief with Sister Paula as his second-in-command.

The Department of Inquisition is a militarized monastic order of the Vatican Papal State, consisting of holy warriors who live to serve and defend the Catholic Church. Inquisitors, the members of the department, are firmly dedicated to the destruction of all that threaten the creed and faith of the Church, although their first mandate is the extermination of the vampires[1]—the ancient enemies of the human race since the Dark Ages.[4] The Vineam Domini is the symbol of the Department of Inquisition.[5]

The head of the department is the Minister of Inquisition, an office presently occupied by Cardinal Francesco di Medici, who also holds the position of Secretary of Vatican Papal Doctrine. The Department of Inquisition is therefore subordinate to the Ministry of Vatican Papal Doctrine. As a domestic security organization, the Inquisitors also serve as commanders in the Carabinieri, the Vatican anti-terror force.[1]

Due to their association with Medici and the Vatican Papal Doctrine, the Inquisition shares a mutual enmity with the AX division of the Ministry of Holy Affairs, both of which are administrated by Medici's half-sister and political rival—Cardinal Caterina Sforza. Unlike Sforza's AX agents, the Inquisitors have no reservations against resorting to extreme methods in order to carry out their duty to the Church.[2] They are known as the "fangs of the Church" and the most powerful destroyers in the Vatican.[1]

The membership of the Inquisition is strictly regulated by the Vatican; young children are selected and raised by the Vatican for the explicit purpose of assuming the role of Inquisitor. In addition to their training and indoctrination, every Inquisitor must swear a vow of absolute loyalty and obedience to God and the Catholic Church. Their allegiance to the Vatican, the Church and the Catholic doctrine is without question. They are proud to serve the Vatican as defenders of the Church and enforcers of its will. As a result of their conditioning, Inquisitors despise everyone and everything that they regard as evil—heresy, blasphemy, and above all, vampires.[1]

The Inquisition was a group of institutions within the judicial system of the Roman Catholic Church whose aim was to combat heresy.

Many of the members of the Inquisition are named after, or have variations of, the names of the Apostles of Jesus. 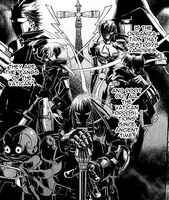 Retrieved from "https://trinityblood.fandom.com/wiki/Department_of_Inquisition?oldid=12884"
Community content is available under CC-BY-SA unless otherwise noted.