Baybars, Duke of Khartoum is the Captain of the Yenceri, the royal guards of the New Human Empire. As the bodyguard of the Empress, he is an aggressive and skilled fighter.

Baybars has dark skin, black dreadlocks and a black beard.

He is seen wearing his red armor.

Baybars is loyal to the Empress: he acts for her and apparently tries to arrest Ion, although whether he truly intended to do this or not is unclear, as he states (in the manga) after refusing the soldiers permission to pursue the 'fugitives', to "Break a leg... Laddie". The stage term for wishing good luck seems to indicate an act. He also pretends that Mirka is the Empress and looks after her, as she is an important friend of the Empress, indicating deep knowledge of his Empress' plans. In the end he shows up to save Astharoshe Asran and Abel Nightroad so that they could make it to the palace, which saved the lives of at least Ion and possibly Esther as well.

Later on, in the Dewan (court) with other Methuselah boyare (nobility) and Empress, Baybars formally brings the charges of Ion for murdering Mirka.

When Astheroshe Asran and Abel Nightroad sneak into the palace through the underground catacombs, Baybars saves them from Dietrich von Lohengrin's autojägers, allowing the two to pass safely into the palace.

Mirka gleefully explains to her grandson that they had known about the extremists for a long time, but had no evidence to trap them. Ion clarfies whether she meant she had used her own grandson as bait, to which the Duchess replies she did, and then asks if anything is wrong. Ion is comedically vexed at all of this, but instantly backs down when Mirka questions if he was unhappy about her plan. Mirka hugs him and says he just missed an opportunity to let her tease him. Baybars explains to Astharoshe that that was how the Duchess expresses her love, before commenting Astharoshe Asran's new short hair.

Mirka Fortuna enlists him to help at her household, which cause his hair to comedically turn white.

Side Story: Together with Grandmother[edit | edit source]

Baybars and Ion spar as the younger Lord thinks about the news of Shahrazad al-Rahman's death. The Count does a back flip and lands on his feet, which catches the attention of his grandmother, who thinks he looked like a cat. The story ends with Baybars and Ion forced to wear cat-eared headbands.

Baybars makes his first appearance after the explosion at the Duchess of Moldova's mansion. He states that he has come to arrest Ion for the crime of murder.  Ion's attempt to fight Baybars proves futile, at which point Abel creates a diversion which buys just enough time for him, Ion, and Esther to escape from Baybars. Later he would engage Dietrich's puppets in a secret entrance of the Imperial Palace.

After the death of the Duke of Tigris, Baybars makes a final appearance at the Duchess of Moldova's residence as part of the Empress's security team where he would see Father Abel Nightroad and Esther Blanchett off as they left for the Vatican.

Baybars or Baybars (Arabic: أبو الفتوح) (1223 – 1 July 1277) was the fourth Sultan of Egypt from the Mamluk Bahri dynasty. He was one of the commanders of the Egyptian forces that inflicted a devastating defeat on the Seventh Crusade of King Louis IX of France. He also led the vanguard of the Egyptian army at the Battle of Ain Jalut in 1260, which marked the first substantial defeat of the Mongol army, and is considered a turning point in history. Baibars' reign marked the start of an age of Mamluk dominance in the Eastern Mediterranean, and solidified the durability of their military system. He managed to pave the way for the end of the Crusader presence in the Levant, and reinforced the union of Egypt and Syria as the region's pre-eminent Arab and Muslim state, able to fend off threats from both Crusaders and Mongols. As Sultan, Baibars also engaged in a combination of diplomacy and military action, which allowed the Mamluks of Egypt to greatly expand their empire. 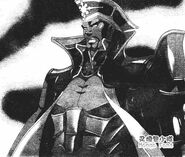 Retrieved from "https://trinityblood.fandom.com/wiki/Baybars?oldid=13410"
Community content is available under CC-BY-SA unless otherwise noted.