Antonio Borgia is a male Terran from the Kingdom of Hispania. Born in the 31st century AD, he is a prince of Hispania. In addition to his royal title, Borgia is also a cardinal of the Vatican, the bishop of Valencia[1] and minister of Vatican Public Relations [2] (note: He only appears in the novel and manga publications). Prior to his career as a cleric, Borgia attended the University of Cologne where he excelled as an academic, becoming a top student in his class and earning seven doctorates by the age of 24.[3] Unlike the other cardinals, Borgia's demeanor is not typical for a person of his station in the Catholic Church. Some individuals regard him as cheerful in any situation.

Antonio is a handsome young man with shoulder-length brown hair, green eyes and he is only seen wearing his Cardinal robes in the manga.

Antonio's manga portrait features him with a purple rose and a hawk with a coin in it's beak. The purple rose is symbolic of love, style and beauty, while the hawk symbolizes insight. His arcana in Thores' tarot cards is The Hierophant.

Antonio is a rather cheerful man who is somewhat of a joker and he often finds ways to sneak up on people causing them to freak out from time to time. He is also a charming person who likes to flirt with women. He himself also notes that he is rather lazy and tends to get bored easily. Despite that, he is very intelligent and very resourceful.

In the novel, Abel Nightroad is sent to protect Antonio, because Antonio is said to have a list of Neue Vatican followers. When their pursuers catch them, he tricks them. It turns out he has already destroyed the file, but memorized its contents.

Reborn on the Mars II: The IblisEdit

In the novels, when Cardinal Caterina Sforza in Carthage and Cardinal Francesco di Medici (Caterina's brother), wants her to return because of a vampire assassination threat, Antonio steps in and suggests that Cardinal di Medici send some of his Inquisitors for protection.

Antonio is introduced in the manga when he arrives with the other Vatican officials and he starts to flirt with Cardinal Caterina Sforza before he is reacquainted with Abel Nightroad (Antonio's friend).

The morning after Esther Blanchett is kidnapped, Archbishop Emanuele d'Annunzio reports to Cardinal Francesco di Medici for the previous day's failings. The Archbishop blames Petros Orsini's presence for causing him to let his guard down, and although initially stunned, the inquisitor relents and takes responsibility for his role in the previous day's events. Caterina steps in and defends Petros, arguing that his original mission was to guard the Pope, and puts the blame back on the police.

Brother Matthew shows up and explains that the weapon the vampire used last night. Archbishop D'annunzio asserts such a sophisticated weapon must be an indication that she was an assassin sent from the Empire, which she claimed. Caterina urges that he should not jump to conclusions as their nemesis has been diplomatic for over a century, but Cardinal Antonio Borgia points out the Empire may feel threatened after they lost István to the Vatican. D'Annunzio tells everyone that all of his troops are already searching for Sister Esther as they speak. Unsatisfied at the lack of experience and proper equipment, Matthew proposes that the Inquisition should help this investigation as well. Although initially reluctant one man could do much, the Archbishop is graciously accepts the help as Brother Matthaios explains that he will have three battle ships and five-hundred men within the afternoon. Caterina and Antonio both point out that it is almost as if he had planned an impending war beforehand. Petros pleads to help in order to redeem for his failings from the night before, but Cardinal Medici simply tells him to guard the Pope. Petros reluctantly agrees. Cardinal Francesco ends the meeting with a warning that with the news of a Saint kidnapped by a vampire could spark a catastrophic crusade, and to be prepared.

Later, Abel comes to the conclusion that the Methuselah was led here deliberately by someone from the inside, because they wanted Esther dead. Petros becomes shocked at such a "preposterous" accusation against Archbiship D'Annunzio. An ominous figure approaches them, but to their luck, it is Antonio Borgia. The Cardinal gives Abel a letter for Abel. Although there was no name or address, Antonio identifies the envelope as property of the Csillag Hotel, which was famed for it's bagel salmon sandwiches. Abel reads the letter and suddenly feigns a stomach ache and runs, but is stopped when the Cardinal orders Petros to catch him. Antonio reads the letter to realizes that it alleged "Archbishop D" was planning a conspiracy, and it was from Esther. Antonio realizes no matter if the contents of the letter are true or not, the Csillag Hotel must be investigated, and allows Abel to investigate. Petros insists on going as well, but Antonio points out he is assigned to guard duty. Just at the moment, the Pope asks if he could them the permission to go, as he did not want Esther to die. Petros begins to comically cry and Abel remembers Antonio mentioned the hotel made delicious bagel sandwiches. Antonio comes up with a plan: the two have the perfect excuse to leave under the guise that they are buying a bagel sandwich on the sacred orders of the Pope.

Antonio appears in Esther Blanchett's flashback where he explains that ordinary people are looking for a hero in a time where people are not concerned about war.

﻿Antonio is a first name of Latin origin and the exact etymology is unknown.

"Borgia" is a last name of the House of Borgia, which prominent during the Renaissance in Italy, with Rodrigo Borgia holding the position of Pope. 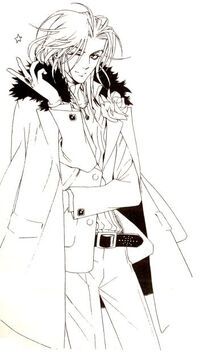 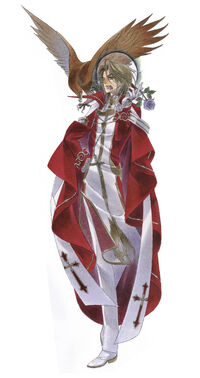 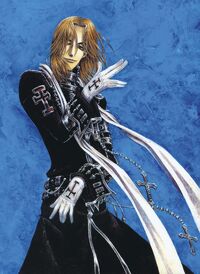 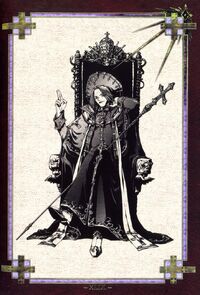 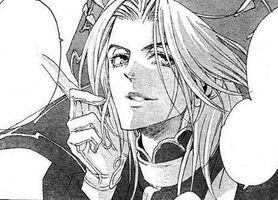 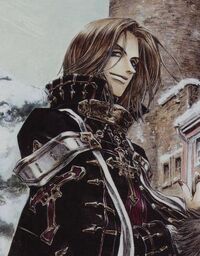 Antonio in RAM 4, Judgement Day
Add a photo to this gallery

Retrieved from "https://trinityblood.fandom.com/wiki/Antonio_Borgia?oldid=13187"
Community content is available under CC-BY-SA unless otherwise noted.